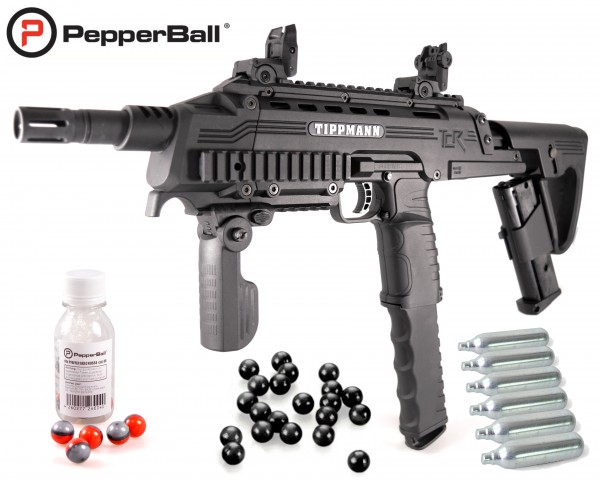 This first class home defense system is one of the best defence against animals in case of selfdefence. It works with a ultra strong pepper irritant.

The Home Defense Advanced is an expansion of our Home Defense Pro system. The longer barrel increases the range of the weapon considerably. In interaction with the so-called Red-Dot sight can aggression already stopped on the lot border. The including undergrip distributes the weight on both hands and adds stability when aiming.

If it has to happen quickly, the centerpiece can stand alone. This systems used with Pepper Balls stopp animals quickly. The system is so successful that it belongs in the US to the standard equipment in patrol cars.

The strong .68 caliber shoots optionally hard rubber balls or Pepper Ball®. It is particularly advantageous to combine both types. So attackers can already hold off at a distance of up to 66 feet by the high stopping power of hard rubber balls, then the PepperBall® break the will to attack.

All the important parts of the weapon are made of metal and this is the reason why the gun is so robust.
For its size, the weapon is very light, this is achieved because the housing is made, below the barrel, of tough plastic, which saves a lot of weight.

An important feature is that the CO2 cartridge is not seated, as in many other CO2 Guns in the housing, but has its place in the magazine. Only when pushed into the gun CO2 cartridge that is pierced. The gun can remain for months in the supplied carrying case stowed. If necessary, it is still instantly ready for use.

We tried the weapon and we be sure this is a real Home Defense Gun. The strong caliber penetrates effortlessly several layers of cardboard. Although it is very large, you will feel so well protected, in seconds the pistol is converted from a showpiece to a defense weapon.

The gun will be delivered in a padded case completely with all accessories needed, includig replacement magazine an holster, the ammunition and a CO2-capsule (sufficient for ca. 24 shots). After a short time the pistol is ready for use.

PepperBall® LIVE-X The PepperBall bullet is a bullet filled with a strong pepper irritant. If the bullet hits its target, the bullet will burst and set the pepperpowder free - the effect is similar to a pepperspray.

Rubber balls The heavy rubberballs can be used up to a reach of ca. 100 feet, and is given sufficient defensive potential.