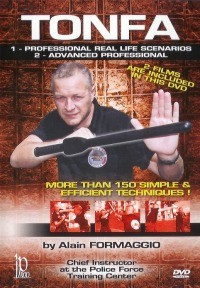 Description Evaluations 0
Description
This DVD shows self-defence methods, where they are needed - on the streets. The techniques are... more
Close menu
DVD - Tonfa

This DVD shows self-defence methods, where they are needed - on the streets. The techniques are easy, the counterattacks fast - mostly with the objective to bring the attacker under control, as soon as he goes to the ground.

This DVD presents a lot of methods of self-protection against attacker, like caning and kicks, knives or baseball bat. The tonfa-handling is presented with the help of real scenarios, for example how to bring about someones downfall, hold him down and control him.

Since 20 years Alain Formaggio is police officer. He teaches self-protection and tonfa and has already trained hundreds of security forces, both at the occupational frame and at the clubs and societies.

As incorporator from FFTS, he was one of the first who offered apprenticeships für security forces. Because of his 20 years of practical professional experience, he is very appreciated by his collegues.
He is an international expert 8th level and is now technical national officer at FFTS.

By the way Alain also has a higher national diploma from the national commission for Savate- and defence stick for french Savate-boxing and is certificate trainer of the international confederation for Krav Maga.

Extras on this DVD:
• chapter choice
• Interactive menus
• History about the tonfa with Robert Paturel
• Interviews with different experts
• Trailer