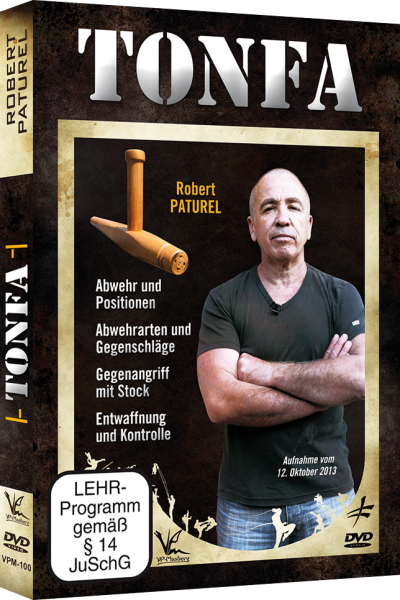 On this DVD, Robert Paturel presents a tonfa course.

You will learn various parry techniques, defensive postures, counter-attacks, anticipations and much more in dealing with tonfas. For noticeable progress with the popular striking weapons, regular repetition of the techniques under the guidance of a trainer is required.

Tonfa is usually trained in pairs.
In the past, it was used to grind rice and it was originally the crank of the grindstone. The tonfa was inserted into this as a kind of handle or crank and thus moved the grinding stone, which ground the rice. In 1972, Ron Anderson had the idea of making a police stick out of it. That's how it started, in California.
Following training in French boxing in California, Robert Paturel brought tonfa to France for the French law enforcement forces.

Main contents of this instructional DVD:

Instructional programme according to § 14 JuSchG.

DVD - Self defense with everyday objects